We just want to warn/remind everyone that the closure of Cole Road between Franklin Road and Barrister Drive next week will make it harder for people to get to the Ada County Sheriff’s Office campus.

That means it’s going to be more difficult for motorists to get to the Ada County Jail, the jail’s work release center, Misdemeanor Probation, Alternative Sentencing, Work Release, and our main ACSO office complex at 7200 Barrister Drive for at least the next two months.

The road closure is scheduled to go from May 17th to July 12. That’s two months where people driving north on Cole Road south of Franklin Road will have go east on Franklin and then north on Allumbaugh Street to get to Barrister Drive, where our campus is.

People travelling south on Cole Road north of Barrister Drive will still be able to turn left on to Barrister, but should expect delays as traffic may bottleneck there. An alternate route would be to take Emerald Street to get to Raymond Street to Fairmont Street to Allumbaugh to Barrister. (Don’t worry – there’s a map to go with this post!) 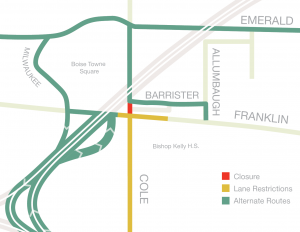 Motorists should also expect quite a bit of traffic as our court transport teams move inmates to the Ada County Courthouse and back and law enforcement officers from all over Ada County bringing people to the jail.

Whatever the case, traffic is going to be weird around our office the next several months – but it will not be a valid excuse for anyone who misses an appointment with Misdemeanor Probation, Pretrial, Alternative Sentencing, the Sheriff Labor Detail, Work Release – or anything similar. Our suggestion? Leave early and give yourself plenty of time to arrive.