Detectives are looking for men who broke into a car in south Boise earlier this month, stole a credit card from inside, and used it in nearby stores just moments later.

Thieves broke into an unlocked car parked in the street in the S. Five Mile/Columbia roads neighborhood in the late afternoon of Feb. 5 and stole a purse, which had a credit card inside.

The thieves then went to nearby stores and spent $91 on seven different purchases before the victim was able to cancel the credit card.

Surveillance video from the purchases made with the card shows two men likely responsible for the break-in.  One was wearing black pants, a white t-shirt over a black hooded sweatshirt, a blue and white baseball hat, and has his left arm in a cast. 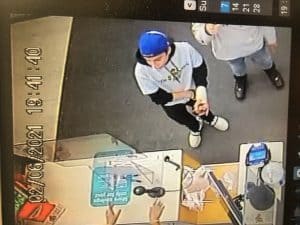 The other man has curly hair and a goatee-style beard.  He was wearing blue jeans and a white hooded sweatshirt with writing on the sleeves.

While the best way to avoid being the victim of theft is to make sure your car or truck is locked at all times, it isn’t a guarantee — especially if someone can see a purse, wallet, or any other valuables in plain sight. So please take that stuff with you wherever you go. Then make sure to lock up.

Most vehicle theft is a crime of opportunity, so let’s all work together to take those opportunities away.

Update: The Ada County Jail has had 431 positive tests for COVID-19 in the inmate population; no new cases for over a month